Route:  From behind Patterdale Hotel up very direct path and then back down the same way.

The weather was glorious – warm, sunny and still.  We parked in the usual large car park parting with yet more coins for the all day charge (will they modernise that pay machine one day do you think?).  We headed behind the Patterdale Hotel and found the path that started the walk.  It’s a very direct route, very steep.  Given the temperature started with a “2” I was finding it hard going.  However, the views behind us were soon stunning back over Ullswater: 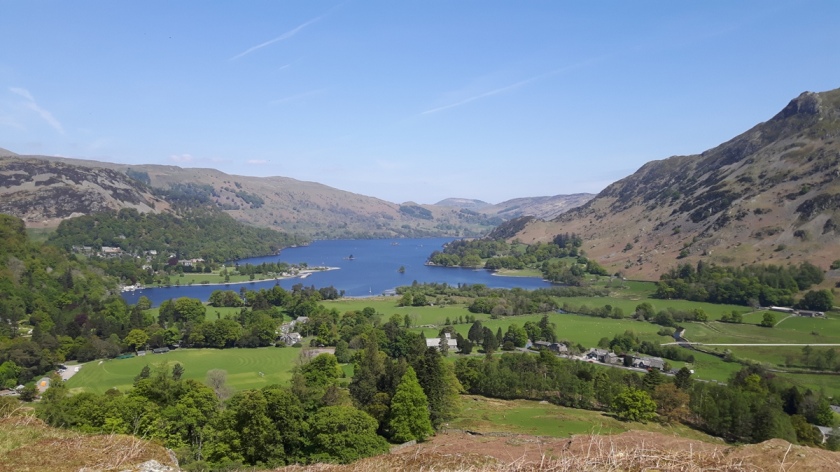 We take a breather at Oxford Crag, only a few hundred feet up but a very picturesque spot:

We can see across to Place Fell – we can see the start of Boredale Hause that we’ve climbed so many times recently just on the right of the picture :

The views south are also good looking towards High Hartsop Dodd with Red Screes behind it.

We carry on up the steep path and reach the pretty top of Arnison Crag:

We admire the views and take a few photos and while we’re there a woman on her own joins us and starts to chat.  She’s trying to complete the Wainwrights and is knocking a few off today.  She did one earlier today she said, pointing generally west, then drove here to do Arnison Crag and Birks.  She asks if we’re also bagging Wainwrights, we say we’re on our second round now we’ve moved up here.

She says she lives in New Hutton, I ask her what it’s like as a place to live as I’d seen a house there for sale that looked interesting.  She said it was a lovely place to live, in fact she had just put her house on the market as they were downshifting and moving closer to family.  I look her house up later but it’s a bit old and rambling for us.  How weird would it be for us to have turned up for a viewing next week, though?!

We start the descent and she follows, chatting as she goes.  We decide to stop for lunch and move away from the path to Birks – she carries on and we wish her well.

We walk a little way along the thin path we’ve found and plonk ourselves on rocks to admire the views over Ullswater.  We have a pasty and contemplate the route to Birks.  St Sunday Crag towers above us in the distance.  We sit some more, then lie back and sunbathe for a bit.  Then we sit some more and agree the view is still wonderful.  We watch three paragliders off Place Fell – looks like a fun thing to do swooping around in the thermals, but I don’t think I’d dare try it.

After an hour we decide it’s far too nice a day to spend slogging up mountains so we decide to head back down.  We carry on our little path aiming to find a less steep route down that we can see across the hillside below us.  We reach an impenetrable fence and track it for a bit looking for a place to cross it.  None appears, so we turn around and make our way back to our original path and slog down it carefully to protect our poor knees.

We get as far as this:

… where we decide to stop for an early afternoon pint.  As we sit in the garden we see the three paragliders we were watching earlier appear from behind the car park and trudge to the entrance to it on the road and start to thumb for a lift.  It only takes about 10 minutes before someone stops – they’re driving possibly the smallest car we’ve seen all day but the driver gamely shifts all his gear into the tiny boot and the three gliders and their kit squeeze themselves in and off they go to be dropped back at the Kirkstone Pass Inn.

A lovely little mountain, but the ascent is a bit vertical.  No doubt we’ll be coming back soon to do the other two mountains soon.