This is our third walk of the Coast to Coast and we decide on the section immediately before our first walk from Patterdale.  It’s ten days after we did our second section and the sun is out again for what will be a glorious bank holiday weekend.

We haven’t made the earliest of starts so while the upside is that the freshly baked pasties will be ready at the Apple Pie bakery in Ambleside to pick up for lunch on the way, the downside is concerns over parking, especially at the popular Grasmere layby.

With pasties successfully bought we chug slowly to Patterdale and easily find a space in the car park – not nearly as full as it was on Good Friday.  We leave S’s car and take mine off to the layby along the A591 just before The Traveller’s Rest pub.  The layby is full, but I decide I can park on the grass verge in front of the Grasmere sign – hopefully people will know they’ve arrived in Grasmere despite me blocking the sign for the day.

We boot up and cross the road and pass a small farm as we head up Tongue Gill.  The views are very quickly stunning in the sunshine:

The gill is enjoyable to walk up and we gain height gradually with the water gurgling below us and waterfalls here and there.  I like walking up passes like this, although the heart rate is soaring so plenty of stops on the way to look back at what we’ve walked – our path is to the left of the gill: 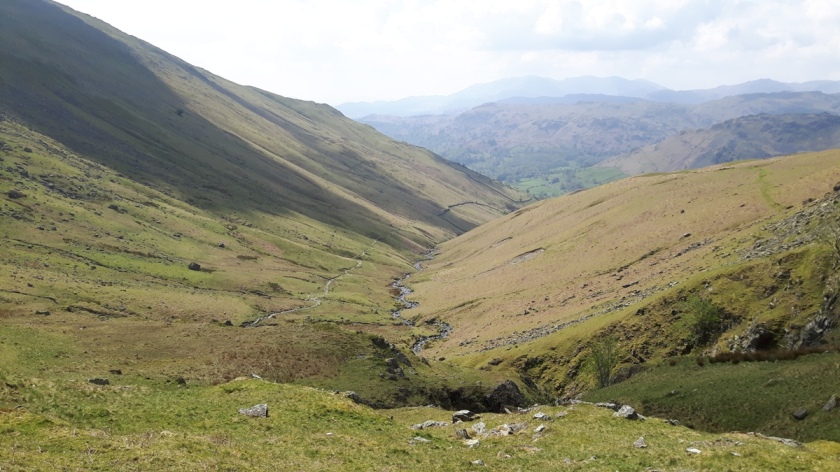 As we get close to Grisedale Tarn the gradient steepens, but the grippy rock is fine to walk on and we’re gaining height quite quickly: 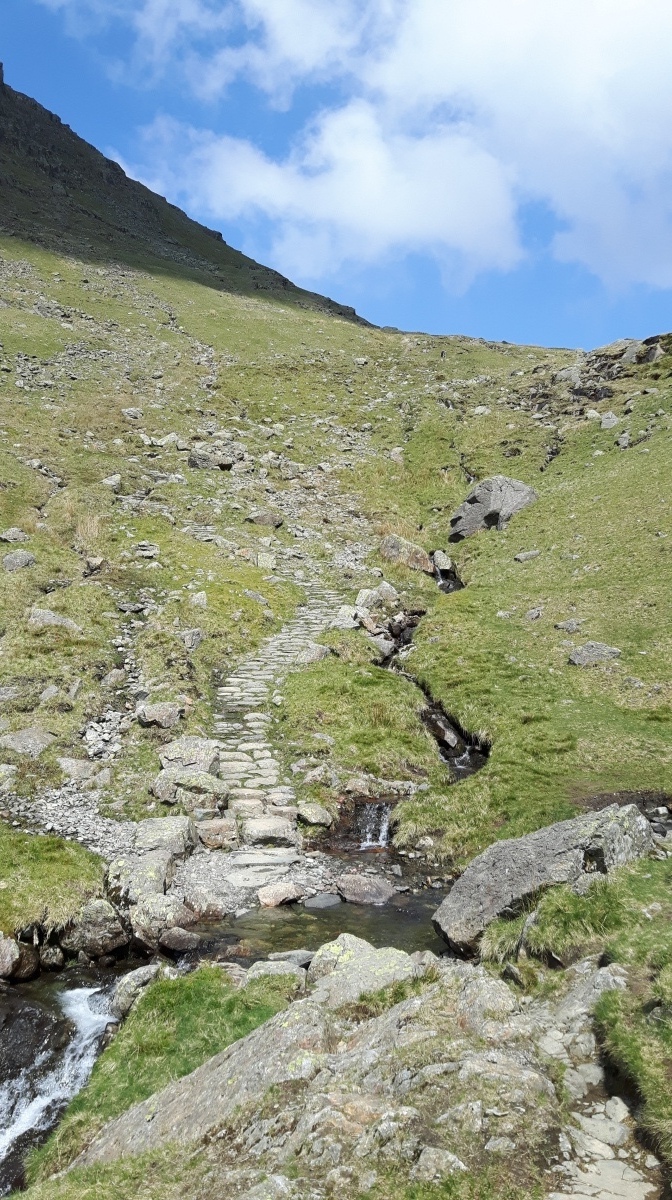 At this point a swarm of young Jewish lads join us from the Little Tongue path, all wearing a Kippah.  They are noisy so we rest on a rock to let them gain ground on us, but they stop on a bigger rock just ahead of us and start opening bags of crisps and snacks – clearly it’s going to be a longer break for them.

We decide to start moving again and they give us words of encouragement as we pass them.  We ask where they’re off to – they’re planning on climbing Helvellyn then down into Patterdale.  Some of the party have maps and they seem confident of what they’re doing.  We wish them well and carry on walking slowly up the tougher gradient.

Once they set off they inevitably catch us up and we sit on another rock to let them file past.  I count them – 22 of them – and look down at their shoes as they pass – a mix of trainers, scuffed school shoes and the odd pair of walking shoes – not a single one of them done up very tightly.  But I bet they’ll be on the top of Helvellyn before we reach the top of anything today.  The fitter ones in front give us more words of encouragement (do we look that old and out of shape??), the slower ones at the back give us pained looks as they try to keep up with the group. They are the ones that have my sympathy, I would have really struggled had I been faced with a mountain at their age.

Finally they all get past us, we give them 5 minutes to pull away before we get on our way again.  It’s not long before we reach Grisedale Tarn.  I don’t recall seeing it before (I must have looked down on it at some point) and it’s really impressive: 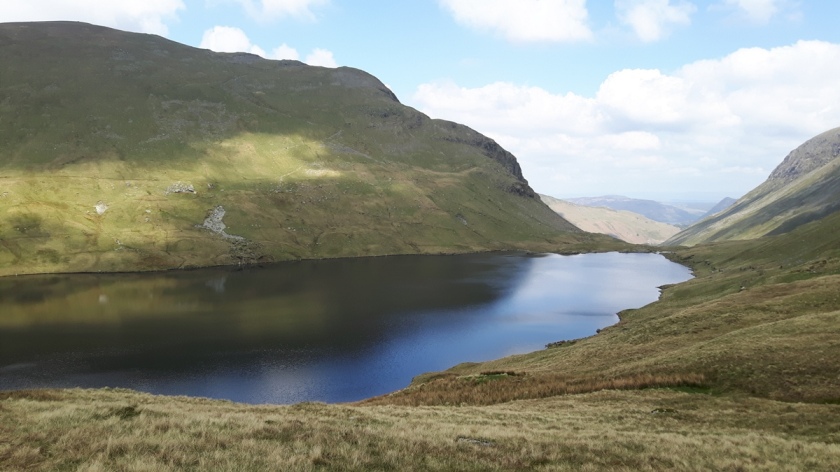 We stop on the verge here for our lunch.  The lads gather at the far end of the tarn at the front of the picture to have their lunch – very loudly.

We’ve decided to take in Seat Sandal on our walk today – it’s just behind us and only 500ft more ascent and an additional Wainwright ticked off.  After the very nice, still warm pasties we head directly up the crags behind us – the last 500ft of Seat Sandal is steep in any direction and we huff and puff and struggle our way up.  We can hear the lads throughout the climb – they’ve been sitting there for over half an hour now, have they decided against Helvellyn?  The path up Dollywagon Pike from the tarn looks daunting, I’m glad we’re not doing it today (you can just see it in the picture above – to the right of the hill at the end of the tarn, then zigzagging left as it moves upwards).

As we finally reach the last 100ft the lads move off – and they are nearly level with us in about 10 seconds (perhaps a bit of an exaggeration, but they don’t hang about once they decide to get going).

We get to the top of Seat Sandal and the views aren’t bad:

Last time we were here S was really struggle with knee pain and I got over-excited as we saw a real live mountain rescue – a helicopter came in to rescue a lone woman who had followed a couple up the very steep scree path up the side of Steel Fell on the opposite side of the valley.  We had ringside seats from the top of Seat Sandal.  I was surprised how quickly it all happened – we had used Raise Beck for our ascent that time, with the side of Steel Fell directly behind us.  The couple had set off up Steel Fell as we set off up Seat Sandal and we had watched their progress and also seen a third figure start to follow some way behind them.  The couple had paused at the scree but slowly made their way up it and quickly reached the top of Steel Fell.  The lone walker had got to the middle of the scree but then didn’t move.  The helicopter must have arrived about 20 minutes later and taken her safely back down to ground level.

I know she was a woman only because a few weeks later I was channel surfing one evening and came across an episode of a Helicopter Rescue programme, not something we ever watched.  I saw that they were in the Lakes so kept watching.  They were called to a woman stuck halfway up Steel Feel and I thought wow, a lot of people must get stuck there.  I noticed it was a person on their own wearing a red waterproof as in the rescue we had seen.  As the helicopter found a safe place to land in a field behind the layby on the A591 our car came into shot!!  I couldn’t quite believe the co-incidence that I caught that very 10 minutes of a programme I never watch.

Anyway, back to our walk.  After photos and view admiring we made our way back down the very steep 500ft – this time on the “official” path we had used in our last ascent.  It felt worse than the crags we had climbed up earlier – I was very glad it was only 500 knee grinding feet.

Back the tarn we picked up the path on the left side this time, under Dollywaggon Pike and onto the steep and rocky path which follows Grisedale Beck all the way into Patterdale:

We were finding it hard work after our earlier exertions but it’s an attractive path, especially in the afternoon sunshine:

The terrain or gradient doesn’t change much as we keep on trudging the five-ish miles down the path before reaching farmland and a good road on the outskirts of Patterdale, all looking stunning in what is now early evening: 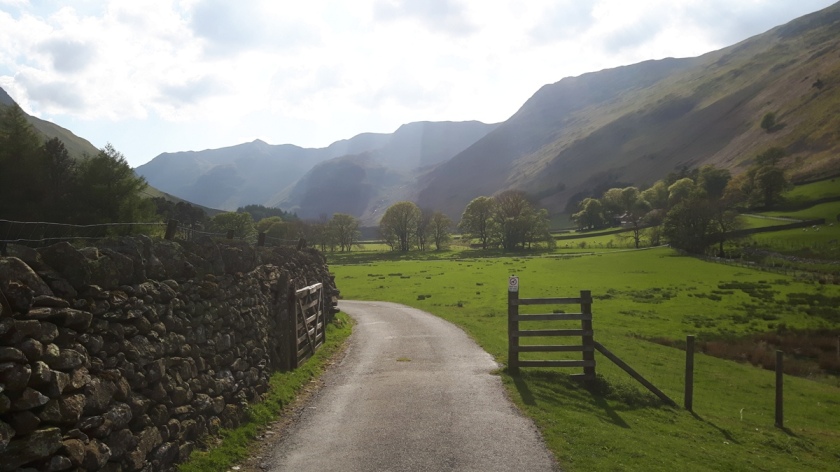 We follow the road until we meet the A592 and turn right to reach the car park.  Just before the main road we pass Patterdale Hall, an adventure learning centre.  There’s some lads in Kippah’s playing football in the grounds – surely not, they couldn’t possibly have all that energy after scaling Dollywagon Pike, Nethermost Pike and Helvellyn, could they?!   But I’d be pleased if it is our group of lads who are back safe and sound (and in fact I check the Patterdale Mountain Rescue site for the next few days to reassure myself there were no dramatic rescues that day – happily there weren’t).

As we reach Grasmere to collect my car it looks faintly ridiculous sitting in front of the Grasmere sign with a now empty layby stretching behind it – but it’s safe and unharmed and I hop in for the very hot and sweaty drive home (it’ll be June before that air-con is finally fixed).

We found this section tough with the addition of Seat Sandal, but it was also beautiful, especially with the glorious weather we had today.