Route:  From the end of a no through road out of Mosedale along the Cumbria Way for 2.5 miles turning right at a footbridge to go directly up to the summit.  Descended west towards Bassenthwaite before turning left to rejoin the Cumbria Way back to the car.

The weather got very warm and sunny after our ascent of Grisedale Pike so we stayed low on our walks or in the garden reading books until it cooled down again.  It looks like wet and windy weather is on its way later in the week and so although today is cloudy, the wind is light, so we decide to head for Great Calva.  We were initially going to take the route from Bassenthwaite but the parking is so close to Peter House Farm I’m nervous and propose the idea of an ascent from Mosedale.  This gets S’s approval so that’s where we head.

We turn right off the A65 to head through Mungrisedale then carry on to reach Mosedale where we take a left hand turn onto a narrow unfenced no through road which we follow to its conclusion.  There are a few cars parked in the laybys here and we spot one car in what looks like a good parking spot about 100 feet above us well off the road so we decide to check it out.  There is a narrow and very bumpy off-road track to the parking place with big holes and rocks along it – not good BMW territory but I persuade S to give it a try.

We move along the track very tentatively until we hear a loud bang and crunch from the bottom of the car that doesn’t sound good.  We do reach the parking spot but quickly turn around and head carefully back to the road to assess any damage.  The car looks ok and no warning lights are coming on, but S is still very nervous about what might have happened (as am I).  We park up on the nice flat verge on the side of the road near the other cars and will check for any oil spills when we get back.

With boots and rucksacks on we set off up the last very pretty bit of road: 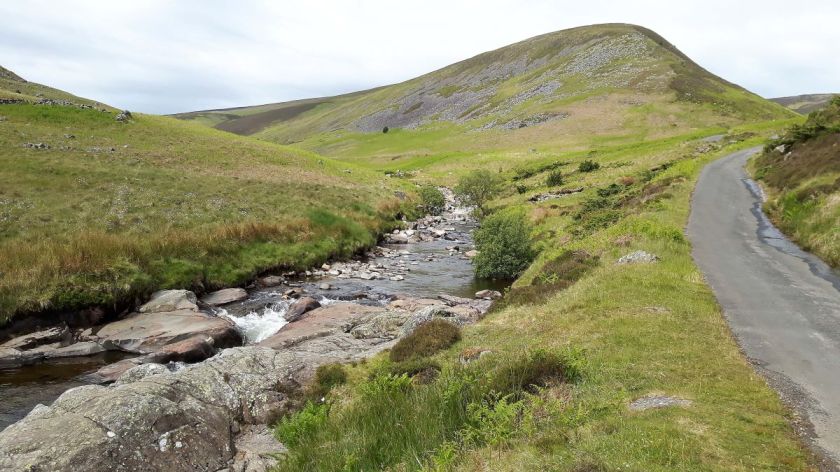 We quickly reach that non-BMW friendly parking area.  There’s no obvious signs of oil spills or bits of car underside on the ground so we try to put concerns about the car out of our mind and set off along the Cumbria Way.

The track is wide but initially quite stony.  It gains height very gradually and soon turns more grassy and easy to walk on.  The River Caldew runs alongside us to our left and, despite the cloudy day, it’s really lovely out here:

The path makes its way through the valley rising gently.  The only challenging thing we encounter is a trio of sheep – a Mum and two teenage lambs by the look of them, who try to block the path and stare us down as we approach.  They gaze steadily at us as we gain on them before getting bored and deciding its time to find a patch of tasty grass to munch: 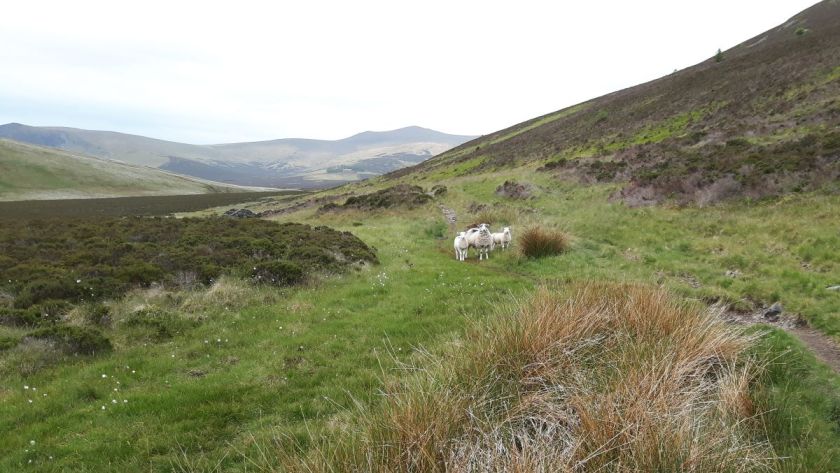 After a very pleasant 2.5 miles with a modest height gain of 300 feet we reach a footbridge which is our trigger to leave the Cumbria Way and head right to tackle the majority of the ascent:

We cross the bridge and look up – gulp – that’s 1,200 feet of very direct ascent coming our way:

As always it doesn’t look quite so vertical in the photo.  We can see a couple and their dog about a third of the way up and can also see a couple of people heading towards us on the Cumrbia Way which carries on beyond the bridge.  We reach the foot of the climb at the same that they do – they are two men who look to be in their seventies and we all stop to exchange pleasantries.

We’re surprised when they say they too are heading up Great Calva – we can’t work out why you would be coming from that direction for this peak.  They offer to let us go first but we insist they take the lead.  They don’t believe that they will be faster than us and seem hesitant, but eventually set off insisting that we let them know if we want to get past them.

We hang around taking photos for a few minutes to let them get a good start on us before starting our climb.  The initial 50 feet are up through the heather you can see in the picture and are very eroded and almost vertical.  We slowly make our way up before reaching a plateau above it where we have some water while we recover our breath.  The two men are making good steady progress above us, increase the distance between us as we climb and disappear from view as we knew they would.

The path is now over a thousand very steep feet straight up the mountainside but its mostly grassy so although very hard work it isn’t at all scary.  We find a rock about a third of the way up which we take a breather on before carrying on.

We’re about 200 feet from the top when we run out of energy and decide to stop for some lunch.  We munch our homemade pasties (not a great batch – we plan to bulk buy from the Apple Pie bakery when we next can and put them in the freezer – we’re not sure why haven’t had that idea before).

Once refuelled we don’t hang around but make the final push to reach the summit:

The views are limited as Great Calva is sandwiched between Blencathra to the east:

…. and Skiddaw to the west:

There is a good view down the valley where we can just see Thirlmere peeking out with the Helvellyn range seen in the distance on the left:

It did look a bit better in real life – the clouds look more glowering in the photos than they did on the day.

We take our photos and find a spot to sit and take in all the views and work out which mountain is which – we’d been totally disoriented on the way up and put everything in reverse order so now we get ourselves right.  A man comes past us and stops to say hello – he sees us consulting “the bible” as he calls it (AW’s Northern Fells) and asks if we’re aiming to climb them all.  We tell him we’re part way through round two and he says he is too – he did a round when he was younger and recently introduced his sister to the fells and now she wants to do them all herself – they’ve done a few together but she’s got ahead of him and now he’s trying to catch up.

I’m not relishing reversing our route in descent – 1,200 feet at the gradient will not be fun.  I decide to investigate alternatives and head off north west and quickly pick up the path which ultimately heads down to the right towards Skiddaw Hause.  We would want to go left at some point to re-join the Cumbria Way below us.  I think it looks doable – the gradient looks much friendlier than our ascent and the terrain seems ok.

As we’re hopping about weighing up the route, a man with two little dogs comes past and again stops to chat.  He has a very broad Cumbrian accent and mentions he is a lifelong farmer.  He seems to want to swap views on the current hot topics of viruses and racism and I struggle to understand what he’s saying in the strong Cumbrian dialect.  I hope I nod and shake my head in the right places before he shrugs his shoulders and carries on down at high speed, the dogs spinning their little legs as fast as they can to keep up.

S agrees to try my off-piste descent and we make our way down the initial section of footpath.  It feels steeper than it looked and when I turn back the top does look a long way up: 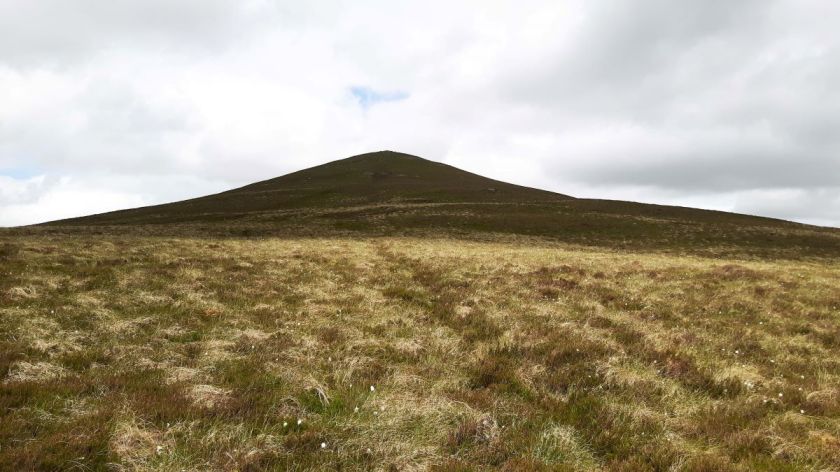 We head off left at this point and the ground quickly turns from grass to thick gorse bushes which seem to get higher as we descend until we’re wading in them up to our knees.  The ground below them has many dips and holes which they’re hiding and its very difficult to stay upright (two sprawls into the gorse are sustained on the way down, naming no names).

We can see the River Caldew clearly below us and the Cumbria Way runs alongside it somewhere so we know where we’re heading as we try and find the least worst path through the gorse: 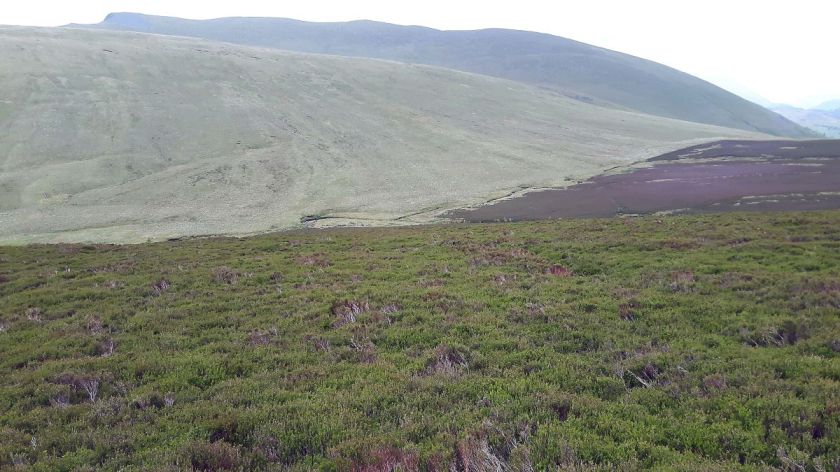 There are a few lone pine trees dotted around and we agree which to head to before pausing and agreeing on the next one.  It seems to take an age to make our way from tree to tree and the river never seems to get any closer.  I have muscles burning in my legs that I didn’t know I had as each step forward is impeded by the thick knee high gorse.

Finally we’re closing in on the Cumbria Way and I take my last step out of the gorse and onto the path with a loud inward cheer.  I look back at the line of trees which guided our route down: 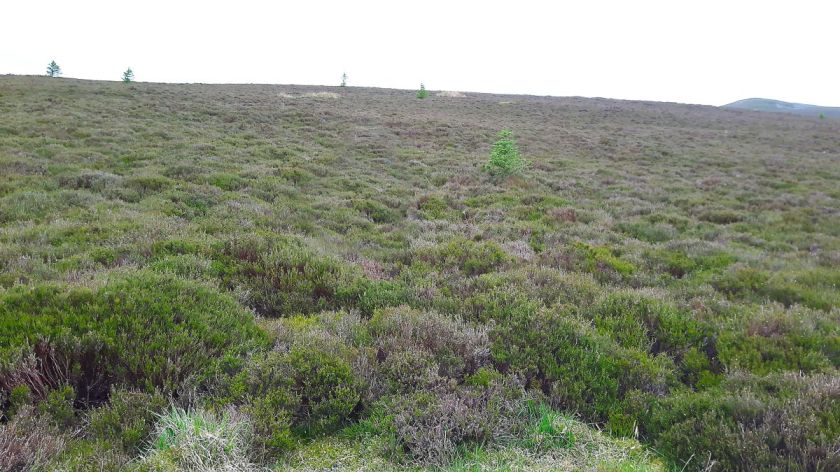 We’re about half a mile further back from the footbridge where we made the turn for the ascent but it is a joy to stretch our legs on the wide grassy and almost flat footpath.

We make quick progress back to the bridge where we stop for a glug of water and to admire one of the very impressive sheepfolds we’ve seen along the route:

We now have to retrace our steps for the 2.5 miles back along the beautiful valley:

It feels good to be able to stretch our legs on the easy terrain and gentle gradient and in what feels like no time at all we reach the last short stretch of road back to the car:

We get our boots off and S cautiously moves the car out of its space for me to inspect the ground where it’s been for tell tale patches of oil or other fluid.  Happily there are none and the car seems none the worse for its experience and gets us safely home.

We don’t think we’ve walked from here before and we really enjoyed this lovely valley.  It’s obviously well known as we’ve seen more people today than we have since lockdown began to ease.  Overall it’s been an enjoyable walk – although S needs to keep me in check next time I have a cunning plan to avoid a steep descent – it’s not the first time I’ve got us into trouble when spotting what looks like a great alternative route.