Another Outlying Fell walked last year but written up during the Coronavirus Lockdown in April 2020.

The very hot spell we had towards the end of June 2019 turned into a cooler and wetter July which has slowed our walking down from the record miles walked last month.  Warmer and sunnier weather has emerged again now and we decide, given the likely temperature today, to head for the small but picturesque Latterbarrow.

We decide to walk from the small hamlet of Colthouse just outside Hawshead as this will make for a longer walk on footpaths which circumnavigate this small hill before reaching its summit.

It’s a nice day in late July so the traffic into the central lakes is predictably slow and busy.  It always seems to be the slowest cars which turn off towards Hawkshead – usually a relief for us as we most often head to the Langdales on this route, but today we have to follow the long line of slow cars which make the turn.

We don’t often drive to Hawkshead and the unfamiliar route and slow pace means it seems to take forever.  We also miss a small road off which would have avoided the centre of Hawkshead but finally we make it through the busy village and onto the road to Colthouse.

We’re about a quarter of a mile from our planned parking spot when we reach “road closed” signs – a short section of road including our parking spot is closed today for roadworks.

We head back through Hawkshead and onto the road towards Ambleside before taking the turn we missed earlier to reach Colthouse from the opposite direction.  We meet the other end of the same roadworks so, with no other parking spots close by, we have to admit defeat.  We eventually find parking, along with many others, at the start of the footpath directly below Latterbarrow.

We’re frustrated by how long it’s taken us to get parked but try to put that aside as we put on our boots.  We decide that we’ll go directly up to the summit but then take the longer route down to make a proper walk of it.

The ascent path is steep but short – in less than half an hour we’ve scaled the half a mile and 600 feet to the summit: 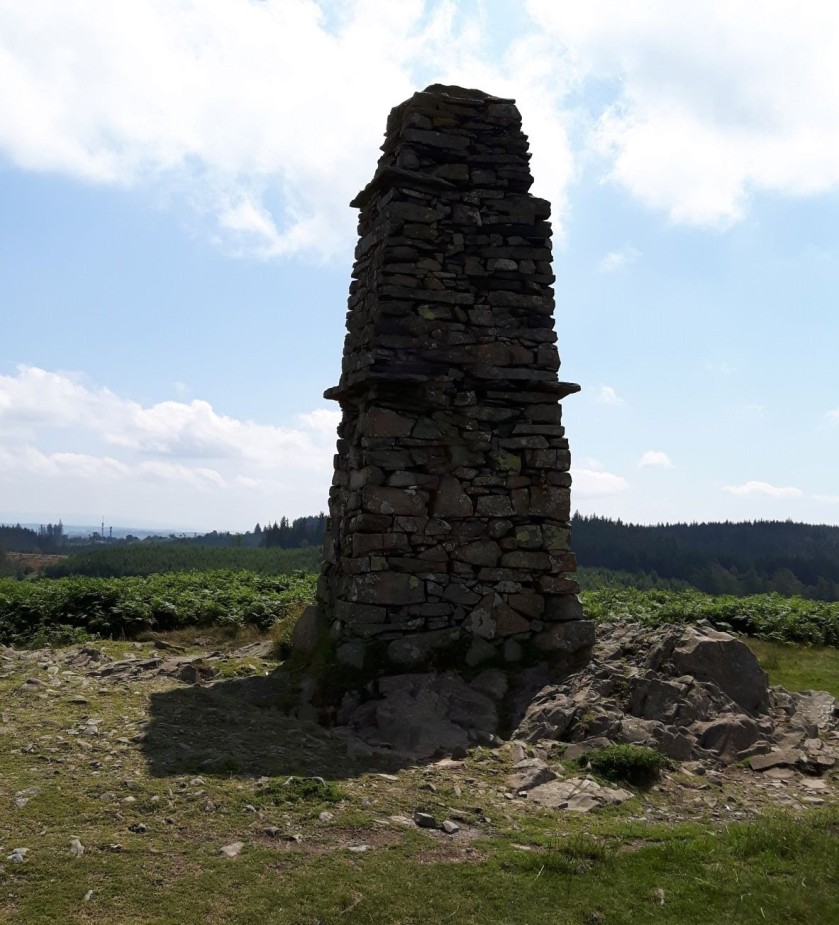 We trot away from the very large summit cairn to the edge of the hill to take in the fantastic views down over Lake Windermere towards Ambleside:

The picture is a little bit hazy but it looked stunning in reality – I’ve taken about 20 almost identical shots of the view which you’ll be pleased to know I won’t include here!

We find a spot on the grass to sit and soak up the sunshine and the views alongside many other little groups and families doing the same.  A tiny tot escapes her group and heads for the cairn and starts to scale the rocks at its feet – her bigger brother comes hurtling to collect her but she looks quite happy and confident in her mountain climbing abilities – I hope she doesn’t lose that spirit as she grows up.

We drag our eyes off the views across the lake to check out the hazy shape of the Langdales to our left:

And then turn our eyes towards the Howgills on our right:

But mostly we enjoy watching the boats pootling along Lake Windermere and spotting the Low Wood Hotel and other well known locations along its banks:

I alternate lying back on the grass to enjoy the feel of the warm sunshine with sitting up to make sure the views are still beautiful (they are) before we reluctantly decide it’s time to make our way down.

We head off north west to pick up a path down the opposite side of Latterbarrow which will loop round to take us through woods to Colthouse and a short walk up the road back to the car.

The path is initially clear but once we’re into the trees it become narrow and overgrown and difficult to walk through.  S is not enjoying this one little bit.  There’s the opportunity for a short cut to miss out a chunk of the woodland but I persuade S to stick with our longer route.  The terrain does eventually improve but we’re feeling very hot despite the tree cover.

Eventually we reach the road and have to negotiate our way round the roadworks – the two workmen don’t seem to mind us – and make our way up the final quarter of a mile to the car.  We’ve only done three of our initially planned six miles, but in the heat it feels like plenty.

We had planned to find a nice pub to enjoy an alfresco lunch after our walk but we’re such red and sweaty heaps we decide to head straight home.

This is a beautiful little hill which was perfect for such a warm day – we’ll have to try it the way we initially intended at some point in the future.