Route:  From New Dungeon Gill car park via Mark Gate between Glimmer and Thorn crags to top of Loft Crag then on to Pike O’Stickle Thunacar Knott, High Raise and Sergeant Man and off to the south down to Stickle Tarn and down Stickle Ghyll path back to the car park.

It’s the last day of our holiday and you were never going to keep us away from the Langdales for long as we start our second round.  The day is cooler than it has been and overcast with rain forecast from early afternoon.

I hadn’t realised that once you were up the Dungeon Ghyll ascent you could climb all of the Langdales in one walk so we decided to set ourselves a challenge for the day and go for a full Langdale round.

We park up at the New Dungeon Ghyll car park and get our boots on.  We head up the Dungeon Ghyll path – rather than the Stickle Ghyll route we would usually take when heading for Pavey Ark.

We have a 2,000ft climb to our first top of the day and while it doesn’t feel as steep as Stickle Ghyll it’s unrelentingly upwards from the word go and S in particular is finding it hard going.  We make reasonable time, though, and reach the top of Loft Crag in two hours:

The cloud is like a duvet over some of the higher fells but even so the views are pretty good – here looking north west towards Eel Crag and Grasmoor: 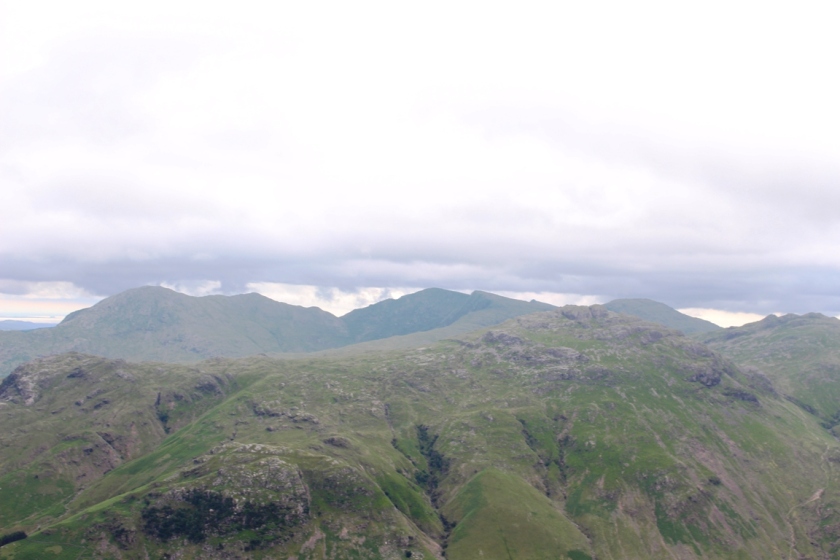 Our next target, Pike O’Stickle, is very obvious in front of us (see summit photo) and we descend from the top on an obvious path.  We settle in the dip to have some lunch before scrambling up to the foot of the climb up Pike O’Stickle’s intimidating looking dome.   There are lots of people about, many of whom are leaving their rucksacks at the bottom of the climb – S decides to do the same but I keep mine on.  The climb isn’t as hard as it looks, although a good 50ft or so of hand to hand combat up the rockface before we’re there:

We don’t hang around for too long before scrambling back down again and retrieving S’s rucksack.  We look across to Harrison Stickle (in photo) and see that the path goes down quite a way before the climb to its summit.  We decide to keep it until later and to head for Thunacar Knott next on a route that maintains most of our height.

There’s no obvious path but we can see what we’re heading for so we strike out across the hillside avoiding bogs as we go.  We’re at the top of Thunacar Knott about 20 minutes later: 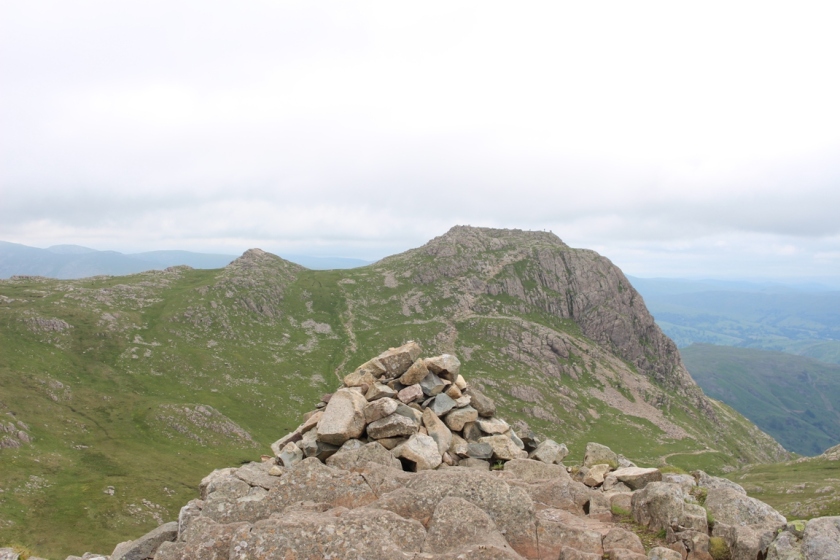 It’s getting even more grey but there are far less people here than there have been on the other tops.  We can just make out Bowfell and Great End to the west although the Scafells are shrouded in the cloud:

We look back across at Pike O’Stickle and Loft Crag from earlier in the walk:

Decision time now – back to Harrison Stickle or carry on to High Raise?  High Raise wins and we strike out on the grassy mile towards it.  The top is in view the whole time and with a bit of bog avoiding on the way we’re there in 30 minutes:

It’s nice and quiet over here, although a party of four Yorkshiremen are reaching each summit just before we do – happily they are leaving High Raise as we arrive.  We’re tiring now, the wind is picking up and the sky is looking very ominous – it makes the views look very dramatic:

We don’t hang about for too long before deciding to head to Sergeant Man.  The half mile is on pathless grass through bogs but it doesn’t take us long to reach the summit: 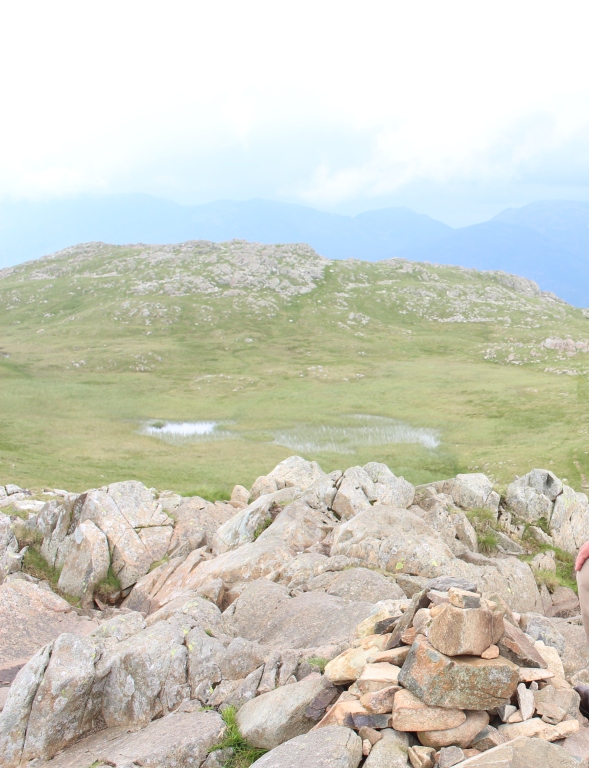 It’s started to rain now so while we look longingly at Pavey Ark we decide it’s time to head down.  There’s a big green path on the map but it’s pathless up here.  We start to make our way down until we reach the path off to Blea Rigg which we ignore as it’s going the wrong way.  With no path visible in our direction we pick our way down river beds and steep rocks.

Stickle Tarn starts to come into view as we descend:

We keep heading towards it and even when we’re this close we struggle to find a way down the 150ft or so of what looks like an abseil:

We finally find a route on the steep grass and start negotiating our way around the tarn to the familiar Stickle Ghyll descent.  Stickle Tarn is beautiful as always, even in the rain:

The descent down Stickle Ghyll is straightforward but at a knee punishing gradient and while we seem to make reasonable progress the 1,500ft still takes us an hour and a half.  Finally we’re back at the car, exhausted as always after any Langdale walk.

It’s been fantastic to be back in these lovely hills, and this time we’ve done all the ones we know less well.  Ironically we didn’t do our two favourites – Pavey Ark and Harrison Stickle – but that means they are there for another day.