Route:  From Longlands following footpaths from one mountain to the next descending back to Longlands from Great Cockup.

We had another rest day yesterday after pushing S’s cold too far on Mellbreak.  He’s feeling a little better today so we decide we’re up for this longer round on mountains with largely silly names which is only four or so miles down the little road our holiday cottage is on.

The weather is cloudy when we wake up but with the potential for sunshine later according to the forecast.  We set off relatively early (for us) and find a parking spot off the side of the road near the farm.  We get our boots on and set off on the Cumbria Way path for the start of our ascent.

After a pleasant half mile or so we turn right and head up Longlands Fell on a clear path up the grassy hillside.  The gradient has steepened but it’s not difficult going and 50 minutes after we set off we’re at our first top of the day: 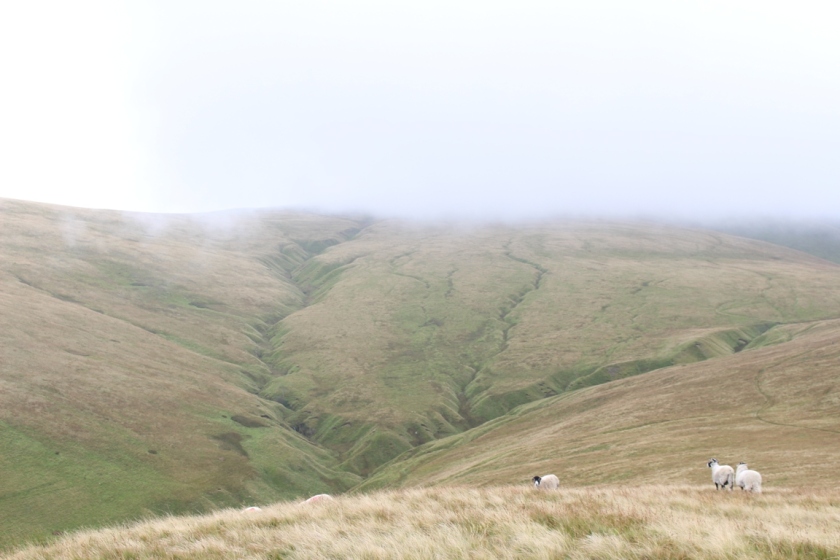 There’s a small cairn on top but otherwise it’s wide and grassy all around us.  The cloud is low so views are limited.  We don’t hang around before heading for Brae Fell.  We have just over a mile and a half and 350ft of ascent to get there.

There isn’t a distinct path and we seem to be wandering around the hillside somewhat.  As we meander along at “tail end of cold” pace a 12 year old fell-runner and his Dad come tearing past us – not only running but also holding an amiable conversation as they go.  They’re a different species, these fell-runners.

We reach a shoulder in the hillside and finally to our left we can see the summit of Brae Fell above us.  We make the left hand turn and huff and puff up the 200ft or so to the summit:

It’s not terribly exciting up here, especially with the swirling hill cloud.  We can see lots of grass, though: 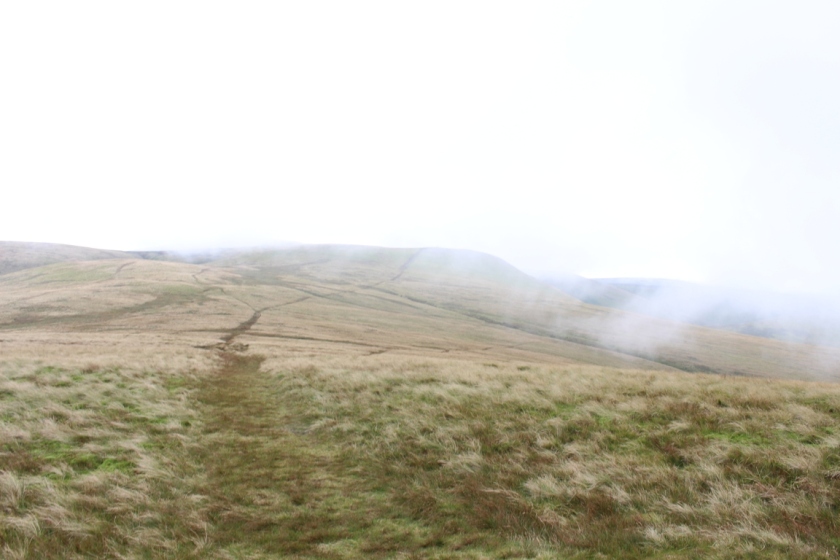 Looking down beneath the cloud line we can see Over Water with Binsey looking like a slightly flattened pudding behind it: 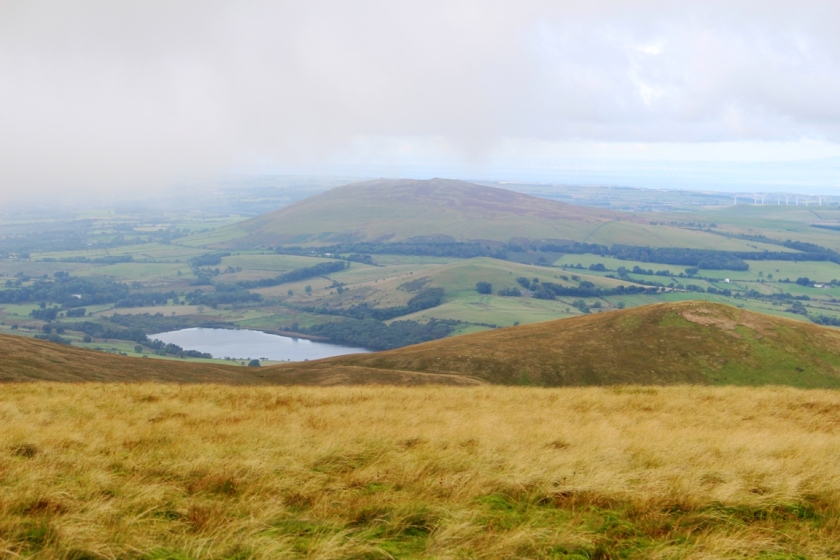 We soon set off for Great Sca Fell – a mile to the south of us and this time with a clear path to follow.  We head over the top of Little Sca Fell (not a Wainwright top) and find a shelter so we decide to stop here for lunch.

After our food we set off and cover the last short distance and 75ft of ascent to the top of Great Sca Fell: 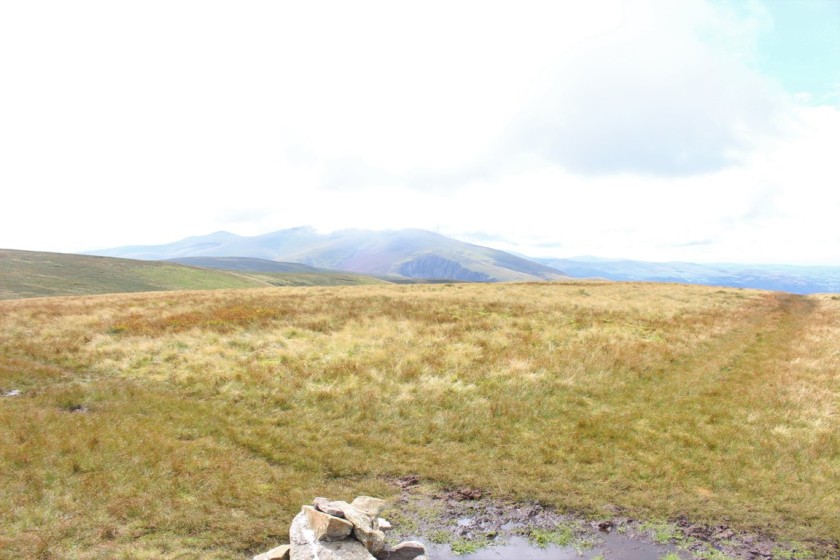 This grassy mountain bears no resemblance to any other Scafell in this district – not sure how it came by its name.  I have a google for the source of the name but the only definitions I get are either about Scafell or Scafell Pike themselves or the history of the name changing from Scawfell to Scafell.  However, I do come across a hit on the Herdy website tells me that the word Scafell derives from the Old Norse word “skalli” which refers to a bald summit, lacking vegetation.  Hmmm …. does grass not count as vegetation….?

Anyway, back to our walk.  The cloud is beginning to lift and patches of blue sky are starting to appear.  We’ve had our lunch and can see our highest point of the day, Knott, looming above us in the distance so we don’t hang around but head off to our next mountain.

The paths are initially indistinct and it gets boggy as we reach the depression.  We then have a steep pull up 250ft of grassy ascent and we’ve reached the top of Knott: 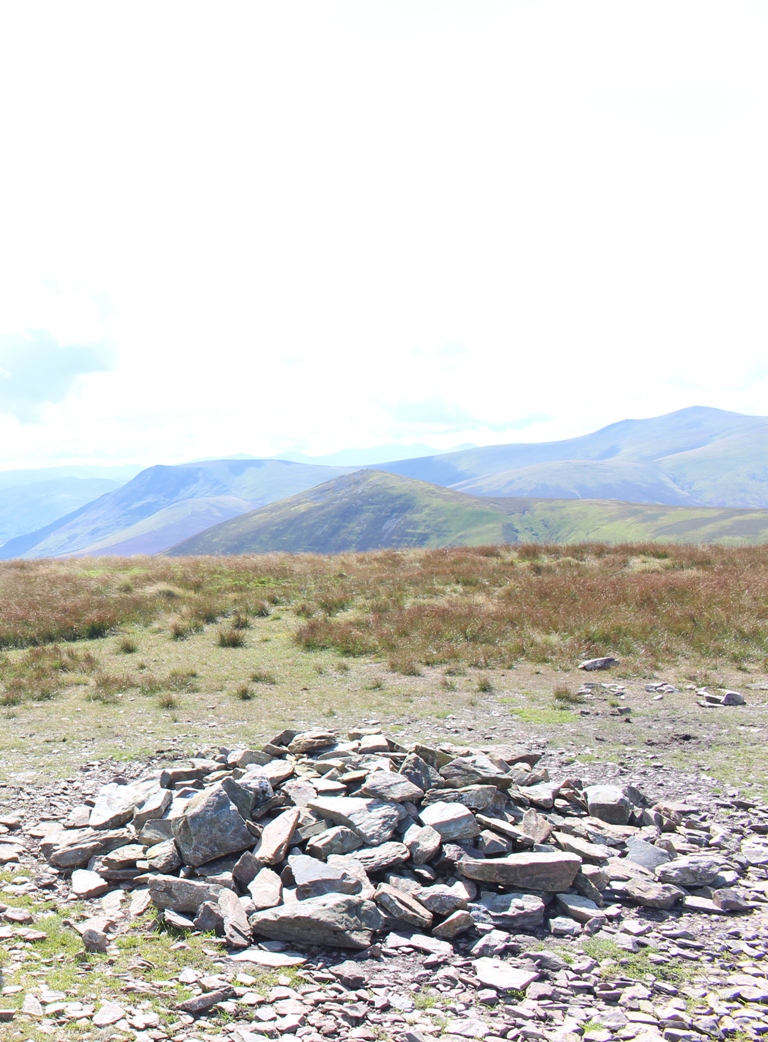 The cloud has lifted and the sun is peeking through in places and the location and extra height mean that the views south and east have opened up.  At last we can see Skiddaw sitting behind Great Calva: 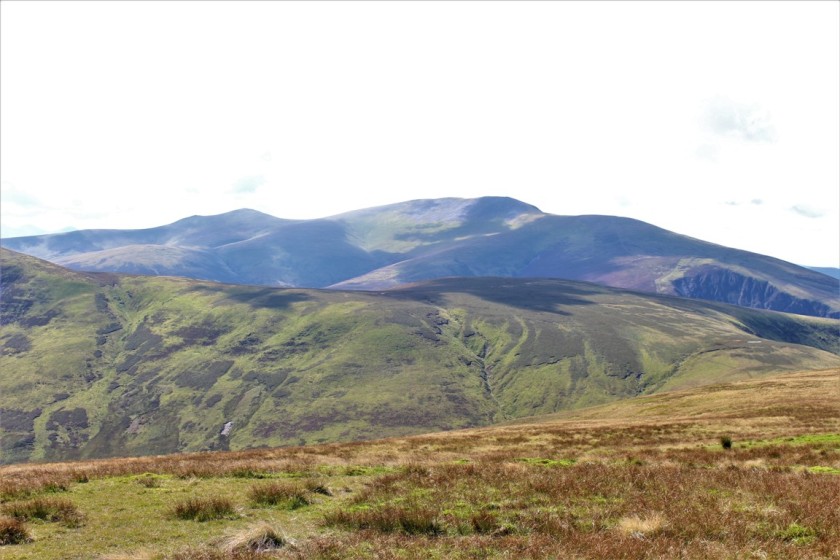 We take some time enjoying our first real views of the day before heading off down to Meal Fell.  We set off in the direction of Burn Todd but soon realise we’re heading too far west.

We have to go off piste, taking a bearing north through tussocks and peat hags.  Before too long we meet up with the distinct path heading back to Great Sca Fell and we follow this for a bit knowing that we’ll have to head off left at some point.

A slim but distinct path appears on our left but it looks very vertical.  It’s going in the right direction, though, so we take it and in fact bouncing down the steep grass isn’t too difficult.  We reach the depression and it’s a short walk up the grass to the top of Meal Fell: 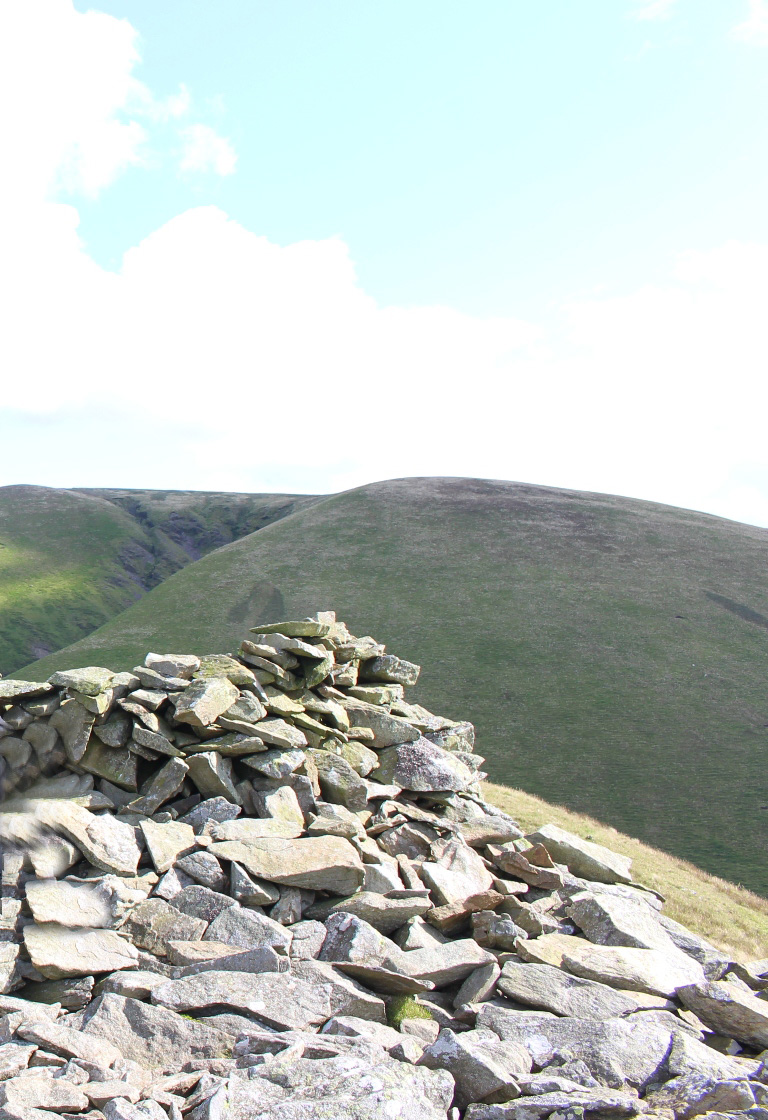 The top takes us by surprise – it has a round shelter as well as a large cairn on the western edge.  It’s the only rocky top we see all day.  It almost looks like there’s a mini quarry or ex-volcano up here.

We find a good spot to have some afternoon tea – nice to have the shelter but the weather has really perked up now and it’s feeling pleasant in the sunshine.

As we eat we look back at our descent route from the Great Sca Fell path: 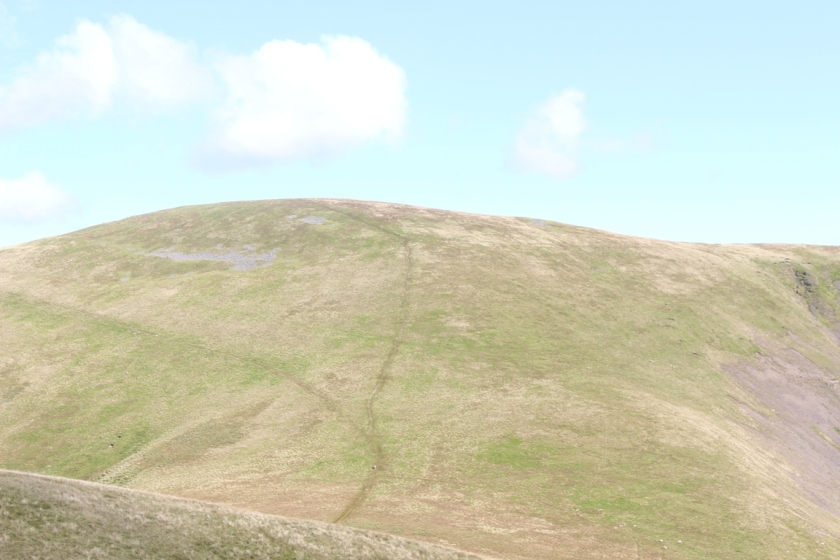 The view south to Skiddaw and Skiddaw Little Man looks lovely in the much improved light: 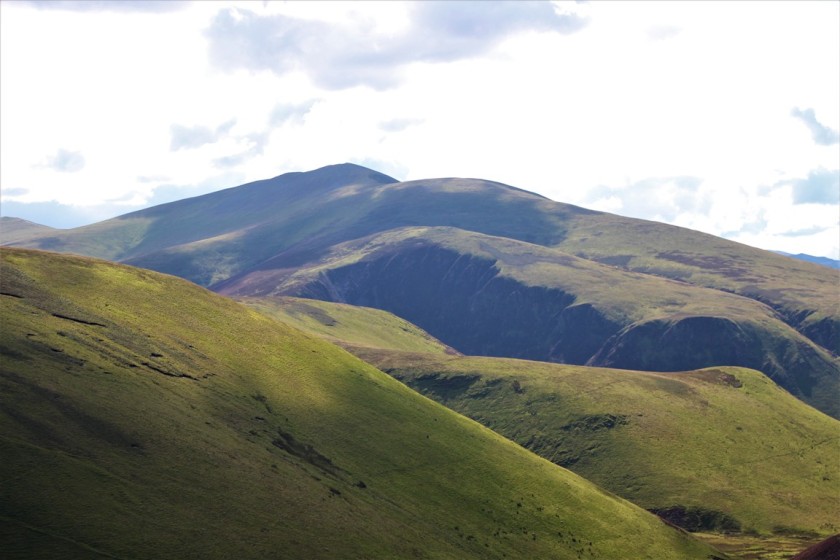 Cakes duly consumed we start the journey to our last top of the day – the wonderfully named Great Cockup.

It’s a steep descent down to Trusmadoor before what feels like a steep 250ft up the other side to the summit of Great Cockup: 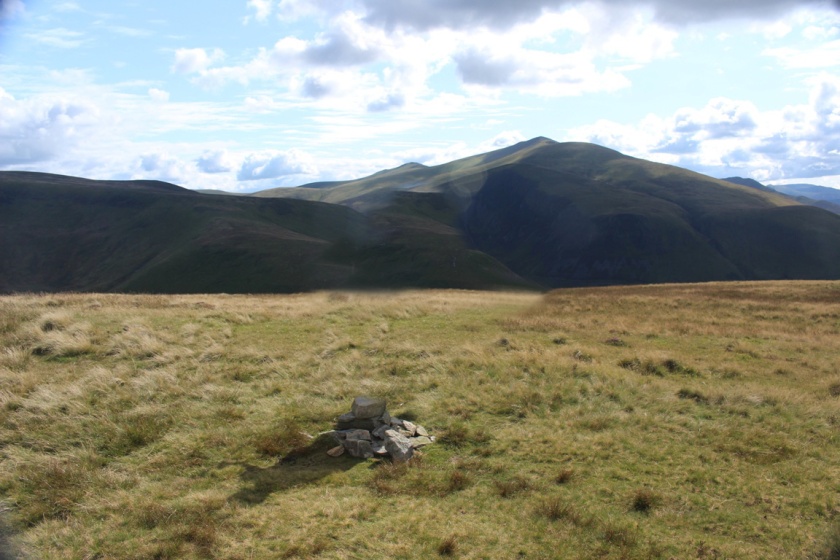 It has a tiny cairn but we enjoy the afternoon sunshine as we wander about on the grassy top.  Yes, that’s Skiddaw again behind the cairn – I don’t seem to have taken any pictures of anything else on this walk.

We start to head down, going off -piste again as we head for a crossing over the River Ellen.  It’s pathless and steep but not too difficult on the bouncy grass.  We reach the river and cross it to join a good clear path on the other side for the last mile and a half underneath Lowthwaite Fell and then Longlands Fell and back to the car.

It’s a while since we did a walk as long as this and happily S has coped well – the cold is definitely getting better.

The Uldale Fells are not the most exciting but this an enjoyable and not too demanding way to get six Wainwrights conquered in a day.