Route:  The old traditional route we used to do but haven’t done for about 15 years – from Ambleside main car park up though the park, down the nose towards Grasmere and back along Under Loughrigg Road.

A very muggy day with low cloud and drizzle – not a day we would have been out in the hills normally, but this is C’s first visit to us since our move to the Lakes and we’re all keen to get up a proper hill.  We chose to make Loughrigg C’s first Wainwright.

We had a leisurely start to the day and didn’t reach Ambleside until 11.30am – the main car park was of course quite full.  A space came free, vacated by a mini, but we squeezed into it successfully.  S went to buy himself a pasty for lunch (C and I had home made egg sandwiches) and C went to buy an emergency waterproof while I made use of the loos.

Boots on we set off to the back of the car park to find it fenced off since we last did this.  Reversed, walked along the road and down a cul de sac before finding the right footpath.  We were soon on the hillside and into the clag: 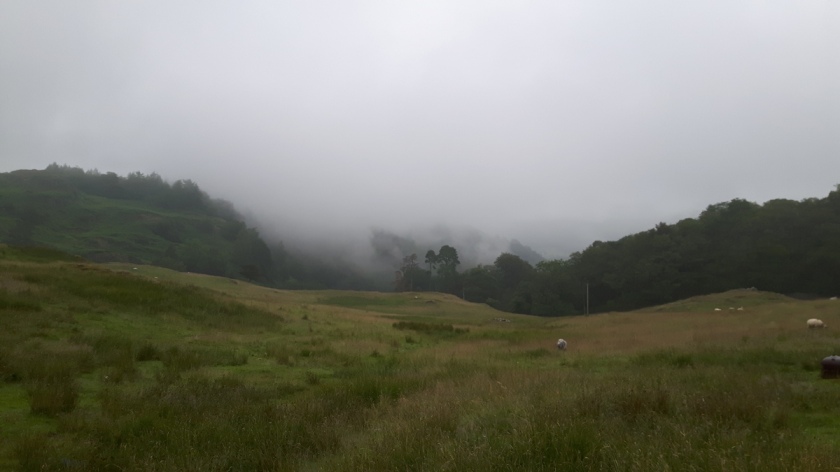 It may be cloudy, but it’s still beautiful and atmospheric:

Despite the advantage of her recent triathlon training we were making a reasonable job of keeping up with C – much slower than her uphill of course, but not as bad as I’d feared.

We were close to the top when the path diverged – down what looked like a very sharp drop into the cloud or up a steep sheep path to a crag then down the other side.  We chose the steep path.  We all got up to the crag and I went over the top to investigate – a grass slope down the other side would rejoin the main path.  However, C’s fear of heights kicked in and she couldn’t make progress over the crag.

We reversed our steps and doubled back to pick up a different path.  We found a good one, but realised we were heading down to Grasmere.  S consulted his gadget for possible routes and it said there was a path to our left.  There was, through the ferns and the bogs.  We set off, and finding we didn’t all sink we successfully made it across – legs soaking wet from brushing against the wet ferns.  Once on the other side a steep grassy path took us up out of the dip and we could see the main path again.

Finally we got to the top – 200ft of extra ascent plus an extra mile of walking – trust us to get lost on Loughrigg.

Enjoyed our lunch perched on the wet grass looking down at what should have been great views.

I was starting to regret only paying for four hours in the car park, and we soon set off on our descent.  Happily, the cloud started to lift and soon we were just below it:

Views at last.  C very impressed and many photos taken:

Descent is steep but not difficult.  Reached the upper path around Rydal Water and started the walk to Loughrigg cave.  Quite busy at the cave (well it is July) including a family who had decided to have a barbecue in the mouth of the cave.  You could smell it for miles, and the cave was choked full of smoke – not ideal.  But I still love that cave.

Really had to get motoring now to get back to the car – a fast stomp from Rydal car park along Under Loughrigg road.  S finds this route tiresome, but I enjoyed stretching the legs over relatively flat miles.  Got back to the car park a few minutes late, took off boots and piled into car, just as attendant appeared at the row of cars in front of us …. phew.

Lovely to do the traditional walk again, and glad we got some views for C.  Note to self – always pay for the maximum time in the car park as we can get lost on anything.