Route:  From parking by phone box in Loweswater taking path up the nose of Mellbreak then walking its length and descending to Scale Beck and walking back to Loweswater along the shores of Crummock Water.

We had a rest day yesterday to try and give S’s cold and chance to recover.  He’s still not feeling great today but sunshine is forecast for the first time this holiday and we want to get out.   I’ve been keen to tackle Mellbreak, partly to show how far I’ve come as a hillwalker and partly to recreate a walk we enjoyed the second half of with friends way back in 1994.

On that occasion I was on my second Lake District Holiday and, despite being so much younger than my three walking companions, I was really struggling to keep up – Skiddaw had been a real challenge on our second walk together.  After a couple of recovery days a pleasant walk in beautiful surroundings taking in a small mountain  was proposed and had sounded good to me.  However, when we got to the start of the ascent up Mellbreak’s nose I eyed up the near vertical scree and said no way.

S & I took a path round the side of the mountain while our friends took the direct route.  Our side route turned out to be hard going – a very narrow sheep track where it was really difficult to keep your footing at such an odd angle.  Our friends had been waiting for hours when we finally arrived at the top and had declared their route “not too bad after the initial scree”.   The rest of the walk was lovely and we have some great pictures from it, especially one of our friend A dipping her toes in a Beck to cool off.

I now have 23 years of hillwalking experience and probably around 250 ascents under my belt so I want to prove to myself that I’m capable of doing that route up Mellbreak’s nose.

We park up by the phone box and get our boots on.  We walk through the village and past the Church Bridge car park and up the footpath via Kirkgate Farm.  Mellbreak looks majestic and just a little bit intimidating as always:

We pass the farm and the path moves steadily upwards and then we’re there, at the start of that vertical scree path.  I remember our friend’s words and believe that the scree won’t last too long as we start up it.  There are lovely views behind us towards Darling Fell and Low Fell: 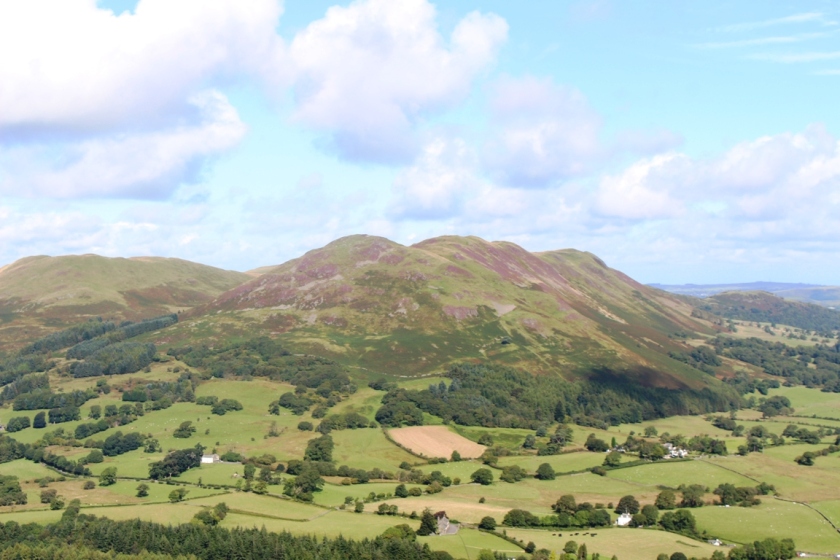 We start the climb and it’s hard going – the steep gradient means that our feet slip on the scree as we push ourselves upwards with very little grip.  I can do almost anything upwards, but this stuff I hate – you wonder how your feet are actually sticking to the ground and making any upward progress at all.

The scree seems to be going on for a long time before we finally reach the rock gateway at the end of it.  I usually like clambering up rocks but the path changes character from here as it climbs up rocky knolls to the northern top.  However the path is very narrow and the gradient very steep and the drop below us is vertiginous.

S really isn’t very well and is struggling and his legs are starting to shake.  We reach a rare promontory where we can rest against the rock and take a breather.  We still have hundreds of feet of this to go and I think this is the most scared I’ve ever been on a hill walk – mostly because I’m worried that S is going to fall.

I decide to take a photo to distract myself – Whiteside and Hopegill Head are in front  of us as we sit:

S seems to have stopped shaking quite so much and we have no choice but to press on.  Finally, finally we reach the top of the sheer rocks and pull ourselves up onto the finally few grassy feet to the north top:

The views are stunning, especially down to Crummock Water and Buttermere.

For all the steepness of that ascent Mellbreak has a long and wide top, stretching out in front of us towards the south top:

We sit ourselves down in the grass and have some lunch.  S is feeling exhausted and I’m trying to recover from that terrifying ascent.

Thankfully the weather and the views are so lovely they, and the food, restore us a little and eventually we’re ready to head for the south top.

The views down over Crummock Water and Buttermere with Fleetwith Pike at its head are stunning as we walk:

I go to the edge of the mountainside and take photo straight down onto Crummock Water and Rannerdale Knotts:

We walk the length of the top and start to make our descent down the side towards Scale Beck.  It couldn’t be more different from the ascent – long and steady and on good terrain.  As we get down towards the beck we try and find the spot where A dipped her toes but we don’t see it – maybe it was up at Black Beck which we’ve bypassed.

We reach the shore of Crummock Water and turn around on ourselves to pick up the shoreline path back to Loweswater.   We have three miles of pleasant walking in beautiful weather but S is exhausted and really struggling.  The going is slow and he stumbles several times getting more and more fed up as time goes on.  It’s a shame as this is a really lovely path.

We eventually reach the end of Crummock Water and look back along it with Rannerdale Knotts behind it: 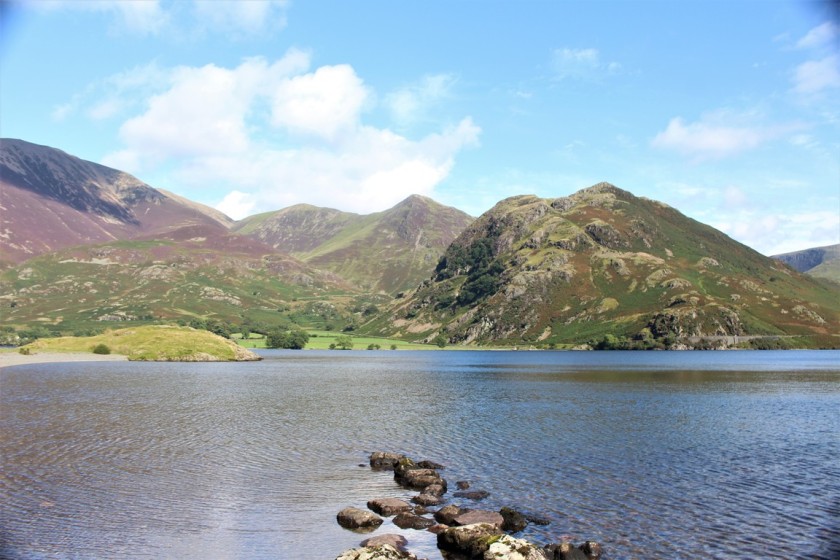 We trudge on and finally reach Loweswater and make our way through the village and back to the car.

Just a reminder from earlier:

We went up the front of that – absolute madness and I still can’t believe we made it when I look at the picture or when we walk past Mellbreak on other walks.

This is a great walk but I will never, ever be going up that ascent route ever again.  I will also never take S on a challenging walk when he’s not feeling fully fit and well, either.