Route:  Parked outside Mungrisdale village hall, over the bridge and followed a small road past Low Beckside turning right after the gate and following the clear path up side of Souther Fell and back the same way.

We had intended to include Souther Fell on our Bowscale Pike and Bannerdale Crags walk in mid April but I had got so cold in the -12’C wind chill that we’d come straight back down after the second of them and had left Souther Fell to be done on its own.

The weather has been very wet and windy and today’s forecast was for showers clearing by midday and strong winds easing during the afternoon.  We hadn’t been out for a week so decided today was the day for a short walk in a nice location.

We’d had a think about which way round to do the walk and decided to take the steeper route up and descend on the gentler path that tracks the Glendermackin river.  We crossed the bridge close to the Mill Inn and set off up the small road, passing a pair of cute cottages on our right.

We reached a gate and once through it spotted the path up the hillside on our right.  It was steep but grassy and straightforward – it wouldn’t be any problem to come down and I was almost regretting not taking the longer route up along the river:

There were spots of rain from time to time as we made our way up in t-shirts and light waterproofs.  The hill was giving us protection from most of the wind at this stage.  The views down the valley and across to Great Mell Fell were looking moody against the cloudy skies:

We reached the shoulder of the mountain and the wind really started to make its presence felt as we made a left hand turn to where we thought the summit was …. except what we reached was very obviously lower than the real top to the right of where we’d turned.  We carried on anyway to catch the stunning views of a cloud topped Blencathra which looked like they’d been CGI’d in:

We were struggling to hear each other speak as the wind battered us and we made the 180′ turn for the real top:

It was becoming a struggle to stay on our feet at this point and I’m amazed that the photo’s aren’t much more blurred as keeping the camera still was virtually impossible.

We snapped the great views of Blencathra again from here – the cloud had moved on rapidly: 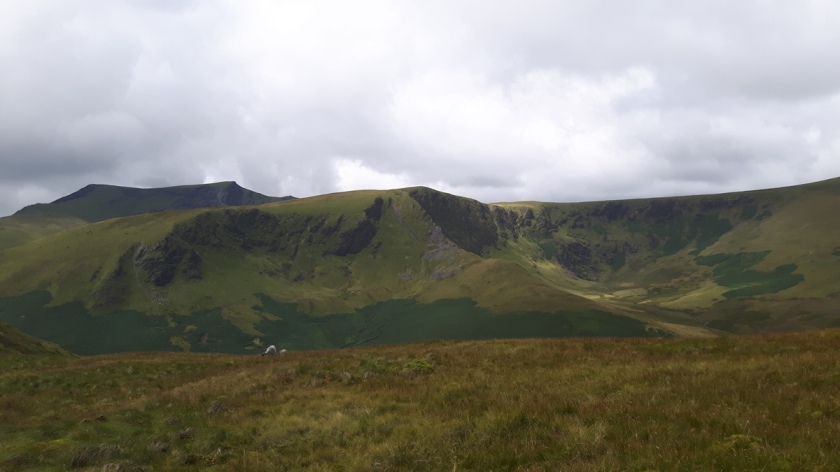 We also had great views of Bowscale Fell (on the right) and Bannerdale Crags (on the left) that we did back in April: 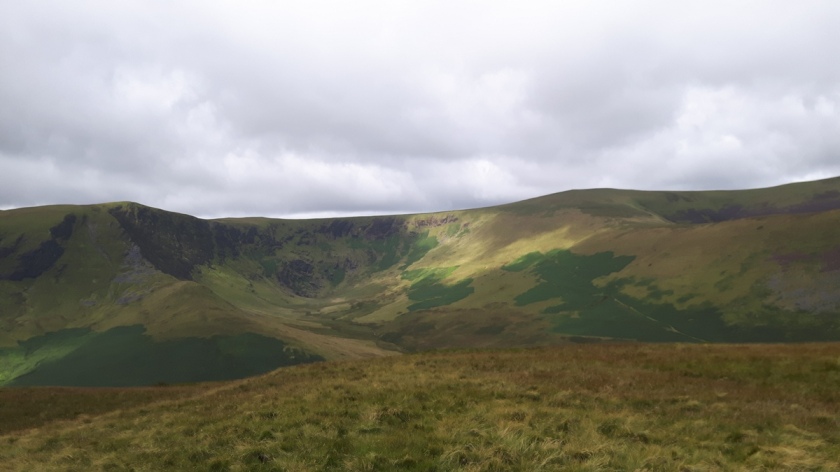 We decided not to take the longer route down but retrace our steps as we knew the wind would drop once we got below the shoulder of Souther Fell again.  We saw another couple struggling into their waterproofs as they crested the ridge, complaining that such strong winds hadn’t been forecast (they had, but it did feel stronger than the 35 mph suggested).

As we picked up the path down we quickly dropped out of the worst of the wind and stopped for lunch about halfway down.  We set off again and quickly reached the car on the straightforward path.  We passed a large man with three of the smallest dogs I’ve ever seen as we passed the cottages on our way back – all of the loyal tiny scraps rushed up to our toes to protect their owner from us!

It was a nice, if brief, walk and a shame not to have done the longer path – we’re definitely out of practice at walking in strong winds now we have the choice of avoiding it most of the time.  It was very quiet in Mungrisdale today with only three people spotted – quite surprising for peak holiday season.